Last Night I had dinner with the MBA students that I have been teaching this term. As we opened up and shared our stories with one another a student on my table asked me about my interest in theology. As I narrated my story I realized that I have been unabashedly polyamorous in my relationship with Gods and religions. I was born into a Hindu family, I went to a convent school, and I used to spontaneously chant, ‘Buddham Sharanam Gachhami’ in our home Hindu temple when I was as young as 8 years or so.

To say I have been obsessed with God would be an understatement. No matter what else has been going on in my inner and outer worlds, a part of me has always maintained a continuous monologue with God inside of me. This part of me has never been confused or worried about which form of God I have conversed with, pleaded with, played with, complained to, and at some points even bargained with. God, in-turn, has always responded to my call and she has never staged a no-show.

About 15 years back, on a trek in the Sakleshpur jungle, I was stuck on a 50 meter high train track bridge without any railings (and attacked by a whole community of hornets whose nest had been unwittingly disturbed). A heartfelt call to Krishna was all it took to find the courage and strength to walk my way back to safety. In fact Krishna stayed unbelievably close to me that entire day, as we navigated further challenges that came upon our group. During the next 48 hours, Krishna guided and empowered me to help other members in our group as well and facilitate physical healing in a way that seemed miraculous even for me. His presence by my side was so real and so tangible that from that day I no longer felt any need to intellectually question the existence of ‘God’. I have had similar experiences with other Gods as well. The Virgin Mary has come to me each time I have knelt before her statue in a church I used to frequent during my days as a PhD student in London. Goddess Saraswati indulges me every time I call out to her before I have to teach a class.

I have been simultaneously loyal to Krishna, to Buddha, to Jesus, to Shiva, to Archangel Michael, to Meher Baba, to Hanumanji, to the Sun God, to the Ocean God, and many more. I have at different points offered myself to each of these Gods, pledging my unfailing devotion and love towards them. As a younger girl I have at one point offered myself up in marriage to the Ocean God and then at another time also vehemently sworn to Krishna that He is my ‘true’ partner.

The interesting thing I am realizing however is that I have never felt divided or ‘untrue’ inside my heart at any of these times. Each of these Gods has been unconditionally accepting of my love and they have been unconditionally giving in their love and none of them has ever asked me, ‘who do you love more?’, or ‘will you commit your entire life to me?’. None of these Gods (or Angels) has rebuked me for being a ‘flirt’. None of them has ever asked me to ‘make up my mind’ about who I want to be with or pray to. None of them has called me ‘undecided’, ‘confused’, or ‘infidel’, because in truth I have not been any of these. Rather, I have been astonishingly clear about which God(s) I want to invoke or call upon and when. There has been no conflict or confusion in my heart and the question of ‘infidelity’ does not even arise because there is no contract of exclusivity.

I love the stars. Everytime I see them, they twinkle and wink with delight and remind me of the glimpse of oneness which I had when I was 14 years old. It was the first night of a trek in the Himalayas and I lay on a rock beside a tributary of the Ganges and casually turned my gaze upwards. A wave of unbelievable lightness engulfed me as I tried to take in the infinite number of twinkling stars that formed a radiant canopy above me. Before I knew it my intellect just stepped aside and I became one with the stars themselves. They had me that very instant, and I had every one of them that very instant. The stars have never left me since then and I have not left them either.

I also love the sun. I worship him as a God and I adore her as the divine painter in the sky. I love the touch of his warm golden rays on my skin in the mornings and I bask in the pink and orange ribbons of light that she creates during the evenings. I also love the moon. I narrate my stories of love and longing to her and she beams back to me visions both real and unreal. Interestingly, neither the sun, nor the moon, nor the stars have ever complained to me about the love or affection or attention I give to other heavenly bodies. I engage and commune with each of them and they with me. Incidentally my mother also loves both the sun and the moon. My sister really has this thing for tracing constellations in the sky with her fingers. I have never ever argued with either of them or even felt jealous of the fact that they love and play with the same heavenly bodies as me.

I have known love in many forms. I will not be able to express what each of these loves has been. But I will try to tell you about the love I feel for ‘Thoraga’ and ‘Growly’. The very first day I moved into my faculty quarters in the IIMB campus, Thoraga made it very clear that we could enter the house but the verandah belonged to her. Even though Thoraga is one of the loves of my life today I will tell you she looks dirty and often smells weird. This is not surprising given that she spends much of her time rolling in the mud and playing on the street. I however, had just moved back to India from a hyper-sanitized home environment in London and my son was three years old. 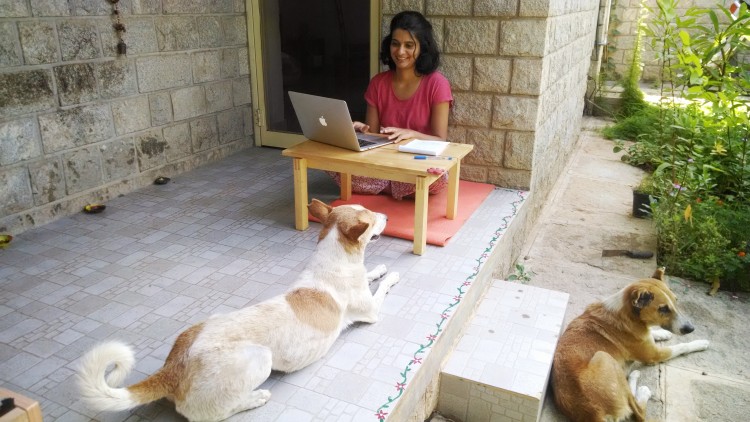 I spent nearly six months trying to shoo Thoraga away. Even though my heart wanted to jump with her and cuddle her I thought that it was in the best interests of maintaining ‘safety’ and ‘hygiene’ for my toddler to shoo the ‘stray dog’ away. Thoraga however, had no such worries of hygiene and safety and neither did she doubt her own angelic nature. She didn’t seem to mind the fact that I never fed her anything and never even gave her a pat. Her love was unconditional and she would come bouncing to greet me every time I entered our street, her tail wagging in welcome delight. Slowly and persistently she kept wooing me over and I don’t know when and how it happened but one day I realized I was quite madly in love with her.

It has been five years since I moved into this campus and Thoraga has been a steady and consistent source of love, warmth, affection, and delight. We have gone through some hard times when we have had to physically battle dog catchers, intervene in street fights with other packs of dogs, and even hide her inside our home at points (which is tough for her because she is used to prowling the streets). Yet the love is so special and so beautiful that I would not trade it for anything in the world. About two years back Thoraga befriended Growly, and they have since been the best of friends. Growly was initially shy and not so fond of human beings. However over time, thanks to Thoraga’s mediation and excellent interpersonal skills Growly also has become friends with many of the human inhabitants on our street including me. I used to be very wary of Growly and for quite some time I would put up with his presence only because he was Thoraga’s friend. Yet again, one day I realized that somehow in a quiet and unassuming way I had fallen in love with Growly as well.

There is a complex network of love here on our street. Many of us human beings love Thoraga and Growly and they love us back and they love each other as well. You should see how Thoraga stands aside to let Growly eat whenever anyone offers them food. There is absolutely no concern or jealousy on my part when someone else loves Thoraga, and she does not mind if I love other beings. There is no signed contract between us, no expectation (even of food – I have taken care to not create a pattern of regular feeding), and no obligation or restriction in our love. When I sit on my garden bench and meditate in the morning sunlight, Thoraga sometimes comes and nuzzles up to me. These are the special days when I feel in communion with both the Sun and with Thoraga simultaneously and I delight in the awesome threesome we create.

A person I met on a recent trek told me that I am mixing up love for God, love for human beings, and love for animals and nature and that these are all very different kinds of love. I listened to his logic but I have a different perspective. I think it is the prerogative of the lover (if at all) to choose the form and type of love, whatever the context. In fact, I feel the nature of love itself is such that more often than not, love just descents and unfolds between unsuspecting subjects and objects. It is almost as if there is a certain degree of helplessness where love is concerned. That is why, given my experiences with love so far, I am choosing to keep my love non-classified, non-exclusive, non-contractual, and ever expanding.

My identity is crafted around four Ps - Poetess-Philosopher-Parent-Professor. You can read more about my journey here (https://craftingourlives.com/ramya/) View more posts